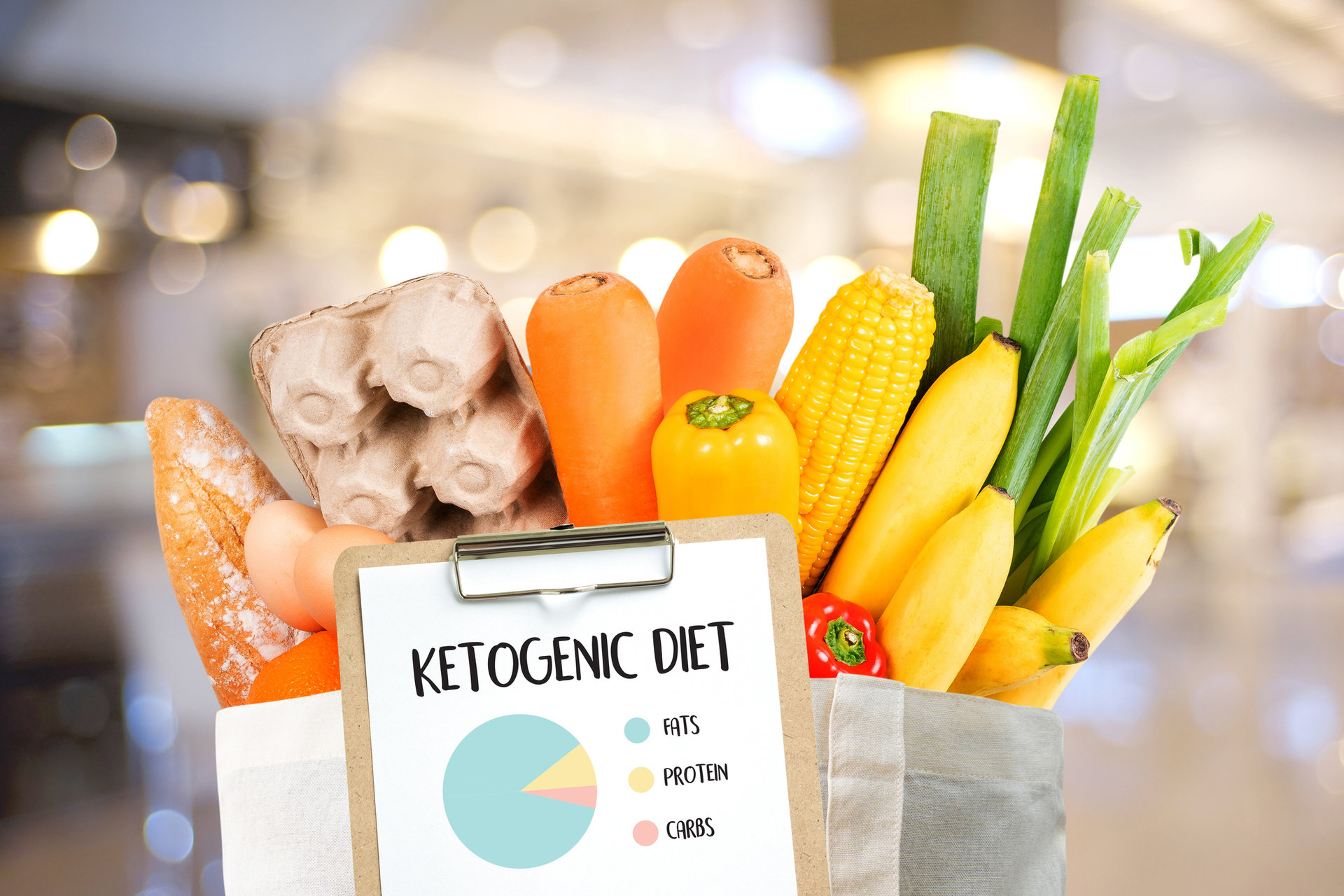 Soups are a mainstay in any Chinese menu. And if you love your soups as we do, you know that hitting the “gooey” spot is an essential quality in a thick Chinese soup.

Xanthan gum fulfils that role by replacing high-carb cornstarch as a thickener for soups, stews, porridge.

It’s also used in gluten-free baking to avoid common allergens like eggs and wheat, and you typically only need a pee sized amount (just half a teaspoon). Price-wise, it’s much cheaper than almond flour and coconut flour, which are popular keto alternatives. As for taste, the clean-tasting gum has a neutral flavour that makes it suitable for any foods unlike the slightly sweet almond and coconut flours.

Finally, you can succeed in a keto diet in Asia with these 10 keto substitutes made to conquer the world’s top rice and noodle region. You’ll see why creamy cauliflower is a perfect substitute for rice in a heavenly fat-infused chicken rice. Then, try your pan at an excellent egg skin to replace high-carb wheat skin in a crunchy keto popiah. All keto recipes here.

You really begin to appreciate ghee much more if you’re on keto. That’s mainly because the grainy golden spread of clarified butter has high good fat content, a neutral taste and tolerates heat exceptionally well.

Experts say it’s better for keto compared to butter, and much healthier than vegetable cooking oils which are often processed.

At 24% MCTs, it doubles butter’s 12%. That’s a big deal on keto where eating high-quality fatty foods is essential to maintaining your health.

In frying too, ghee comes out on top. India’s most widely used cooking oil withstands heat much better than butter and coconut oil, only becoming harmful at 400 degrees Celsius. That’s far beyond the average temperature of wok-fried Chinese food and deep-frys that heat up to almost 200 degree Celsius. And here, critics say butter or coconut oil simply doesn’t match up. Their smoke point happens to be just over 200 degree Celsius.

The best parts? Usually just a pinch of it goes a long way, meaning it lasts for longer. It also has a neutral taste, unlike coconut oil that is slightly sweet and heavier.

We use ghee in almost all of our keto recipes here. You can fry up a quick and convenient keto dragon chives with beansprouts, and a lip-tickling spicy and fragrant keto kong pao chicken with juicy zucchini noodles. 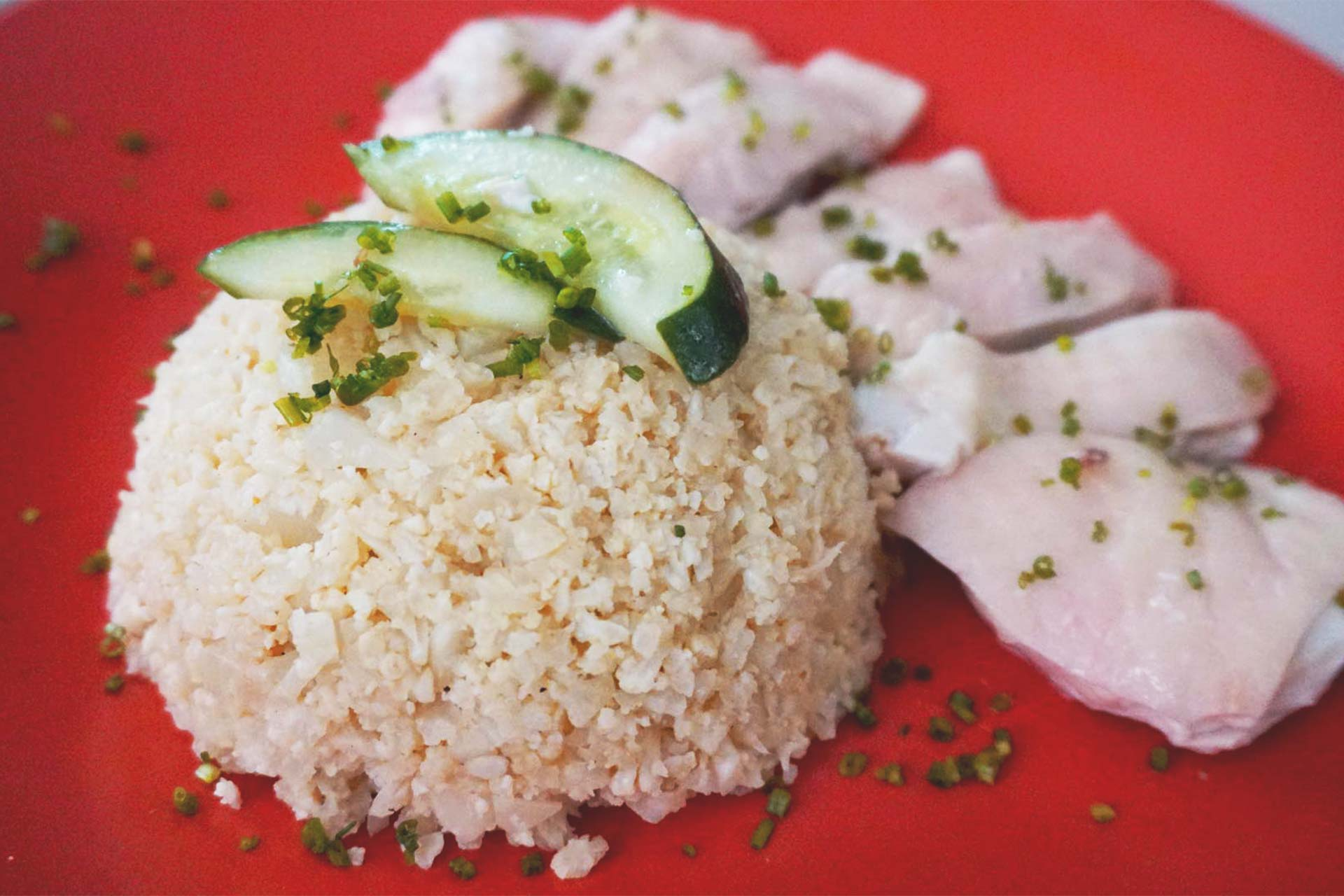 In Asia, we love our rice. So we had to think of a worthy replacement. And cauliflower, believe it or not, tastes wonderfully rich as a base, even mimicking rice grains when crumbed up. The choice vegetable has a low carb count at 5g per 100g of the veggie.

Now we used a head of cauliflower to replace rice in chicken rice, pictured above. Simply cut up, crumb into tiny pieces, and boil. Then drain and leave to dry as rice and add fatty chicken to lip-smacking results.

But it is in porridge that cauliflower truly shines. Its gritty, creamy and naturally sweet flavour blends wonderfully into a pillow-y porridge. If you want it even smoother, add a dash of xanthan gum for a bit of gooey-ness, like in real porridge. And in place of mash potatoes, cauliflower is nearly identical to it in this roast beef and mashed cauliflower delight.

So all in all, a strong contender.

A quick note, if you’re looking for vegetables in general, you probably couldn’t be in a more perfect region. Asian vegetables make the ideal keto veggie as they are usually leaf vegetables, the lowest in carbs out of all vegetables. Pick out chye sim, spinach, even zucchini. You can add a spoon of miso on refrigerated zucchini for a crunchy sweet-savoury snack, as the Japanese do.

Root vegetables are the ones to watch out for- they’re sweet potatoes, onions, carrots and more. Eat less of those. 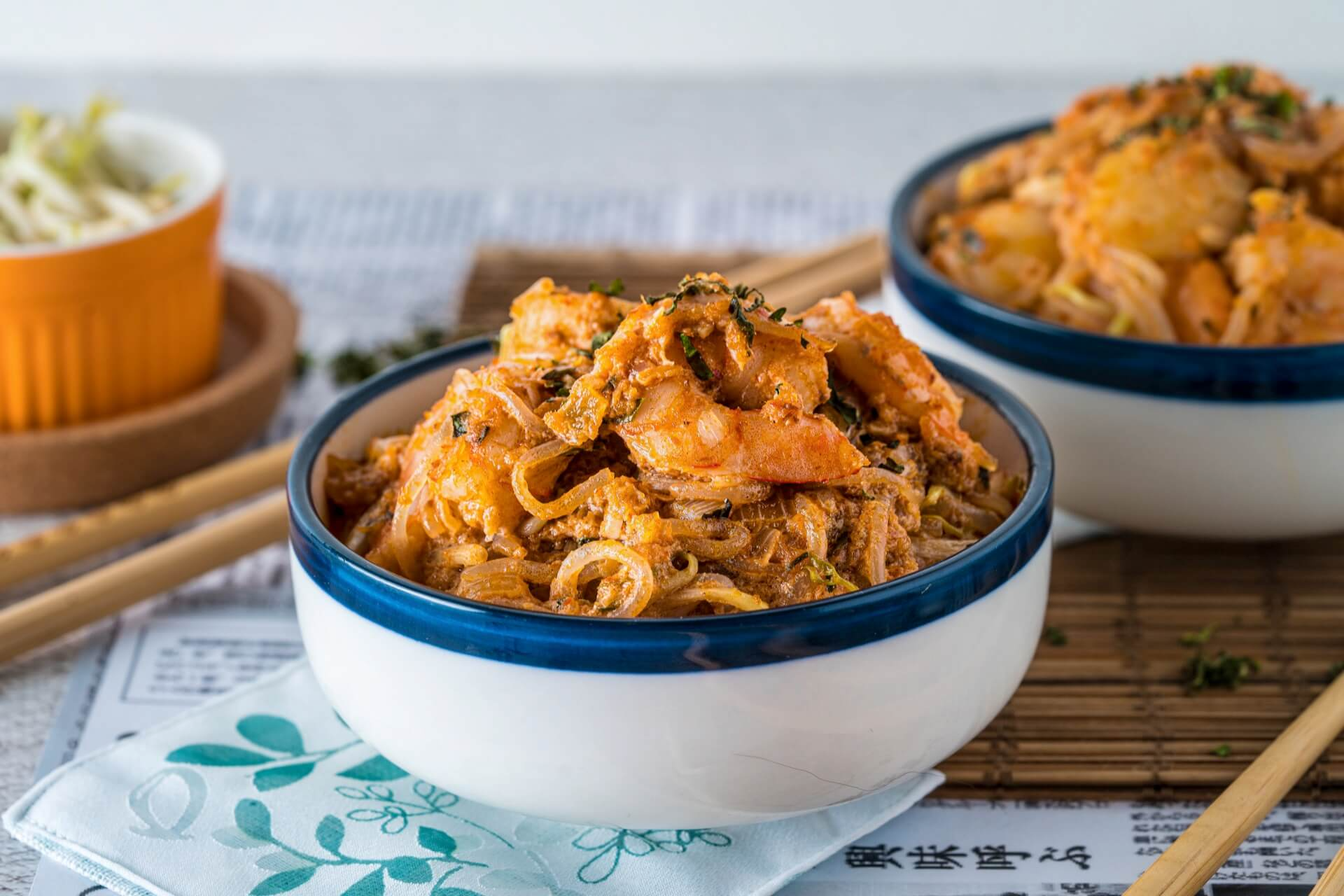 It's all in the S word - Shirataki. Made from konjac yam, shirataki is often added to Japanese soups for a short slurp and chew while sipping on hot soup. But they're also used as a noodle replacement for ketonians because of its low-carb quality.

Called "miracle noodles", shirataki contains 97% water, and 3% glucomannan fiber. The fiber, which comes from the root of the konjac plant, is said to aid weight loss as it absorbs an incredible amount of water, keeping you full for longer.

You get it pre-packed in your local supermarket and and blanch it in hot water. Then drop it straight a steaming bowl of soup and slurp.

We even added chopped bits of it to our keto meatballs, and into a warm soupy shirataki noodle bowl with chicken meatballs. Want something more satisfying? Dig into a heavily-spiced laksa shirataki noodles, fried with the endless pleasure of coconut-cream, and lingering onion, garlic and umami-ness from plump shrimps, pictured above. Yes, you’re still on keto with these recipes.

Besides Shirataki, you can also use zucchini for noodles. Called “zoodles”, you grate zucchini length-wise into noodles. Bursting with zucchini juice, midly sweet and clean-tasting, it readily absorbs surrounding flavours.

And that’s why our recipe of Keto Kong Pao Chicken Zucchini Noodles is an addictive tongue-tickling spicy dish that you won’t stop slurping up. 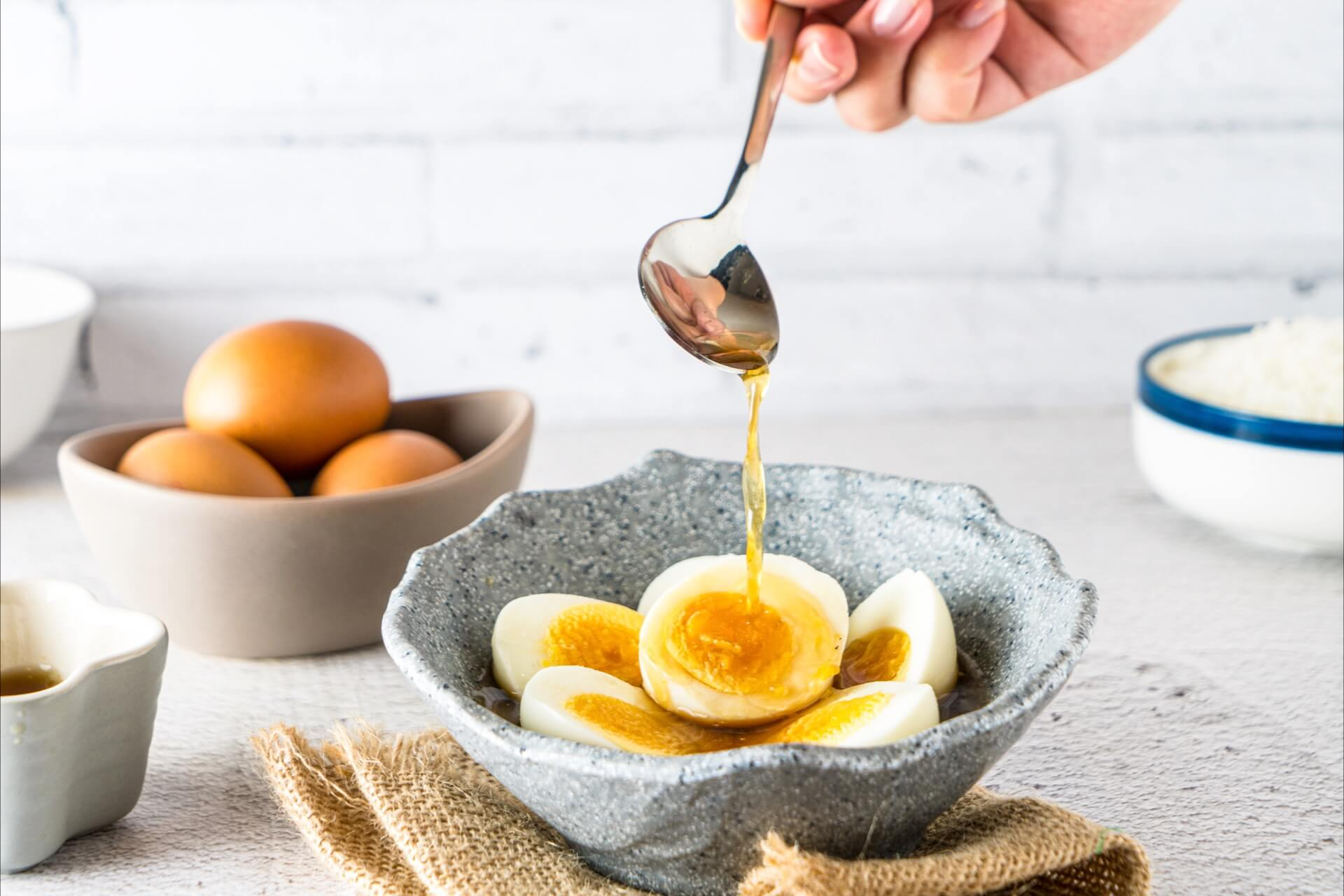 soy sauce may be the essential condiment in Asian cooking, but fans of liquid aminos love the fermented coconut sap that's easily available in supermarkets. In fact, many use it interchangeably with soy sauce. That’s really because it has a savoury seasoned flavour similar to soy sauce.

And if you’re just looking for a savoury touch, consider using olives. This may not be conventional but the green and black fruit is a rich source of sodium with an intense salty and oily taste. Most olives are bottled in olive oil, which is a good keto oil. Simply chop up, mash if you want, and sprinkle on. 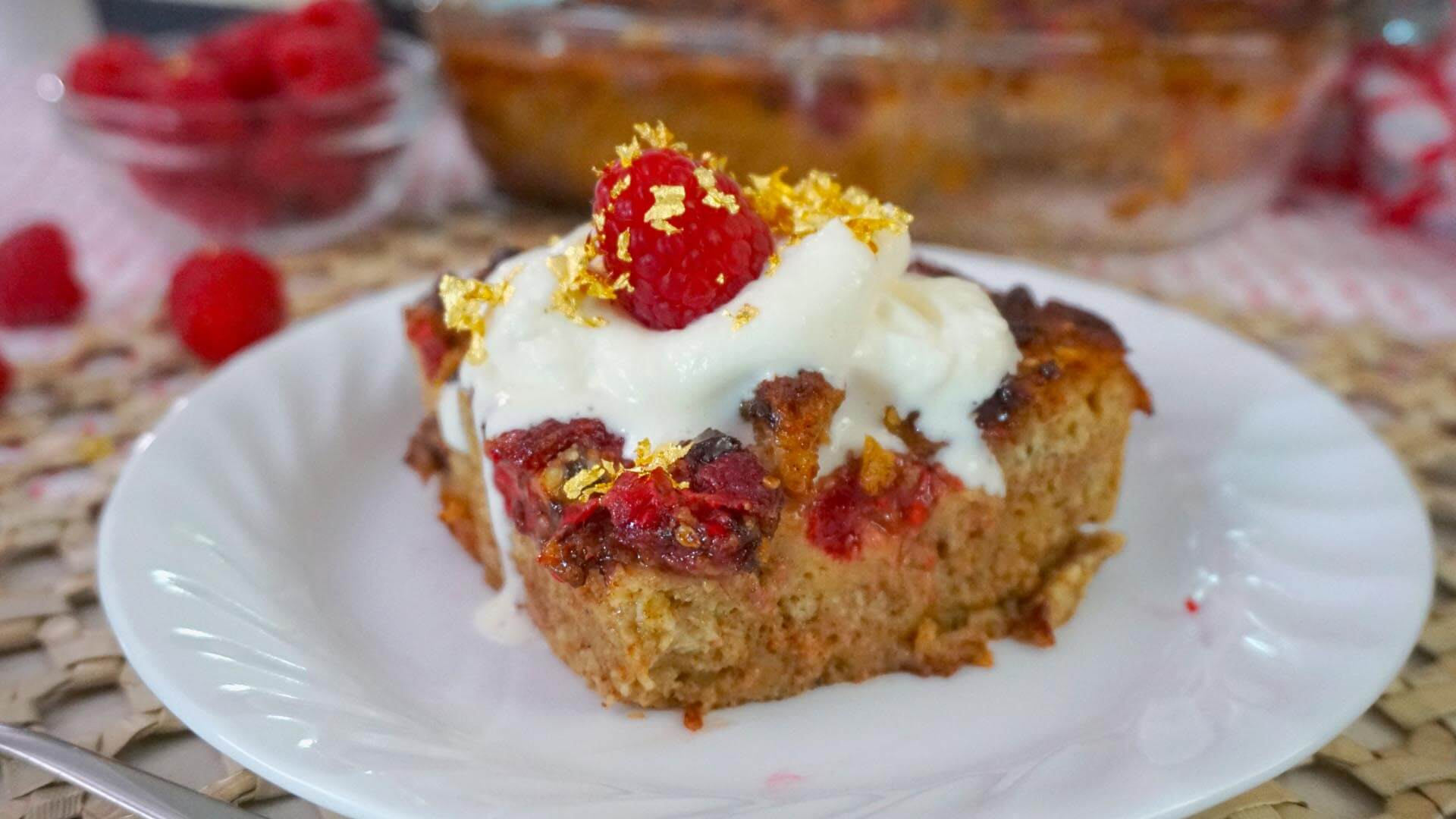 Bakers, this one’s for you. The two cult favourites, Swerve and Lakanto are widely hailed as THE sugar replacements in the keto community. That’s because unlike most sugar substitutes, the respective erythritol and monk fruit sugars measures exactly like sugar.

Lakanto is generally considered to taste sweeter than sugar, and Swerve almost an equivalent. Well, we baked Swerve into a neat, sweet and spongey keto raspberry chocolate bread pudding.

The best part? If you use brown sugar, there’s brown sugar swerve too. That means no more troublesome measurements, yay!

And for those whose sugar fix is chocolate, it’s a good thing the cacao nut is not out of bounds. Just make sure you choose dark chocolate- at least 70% cacao to be keto-qualified. So, more bitter than sweet. 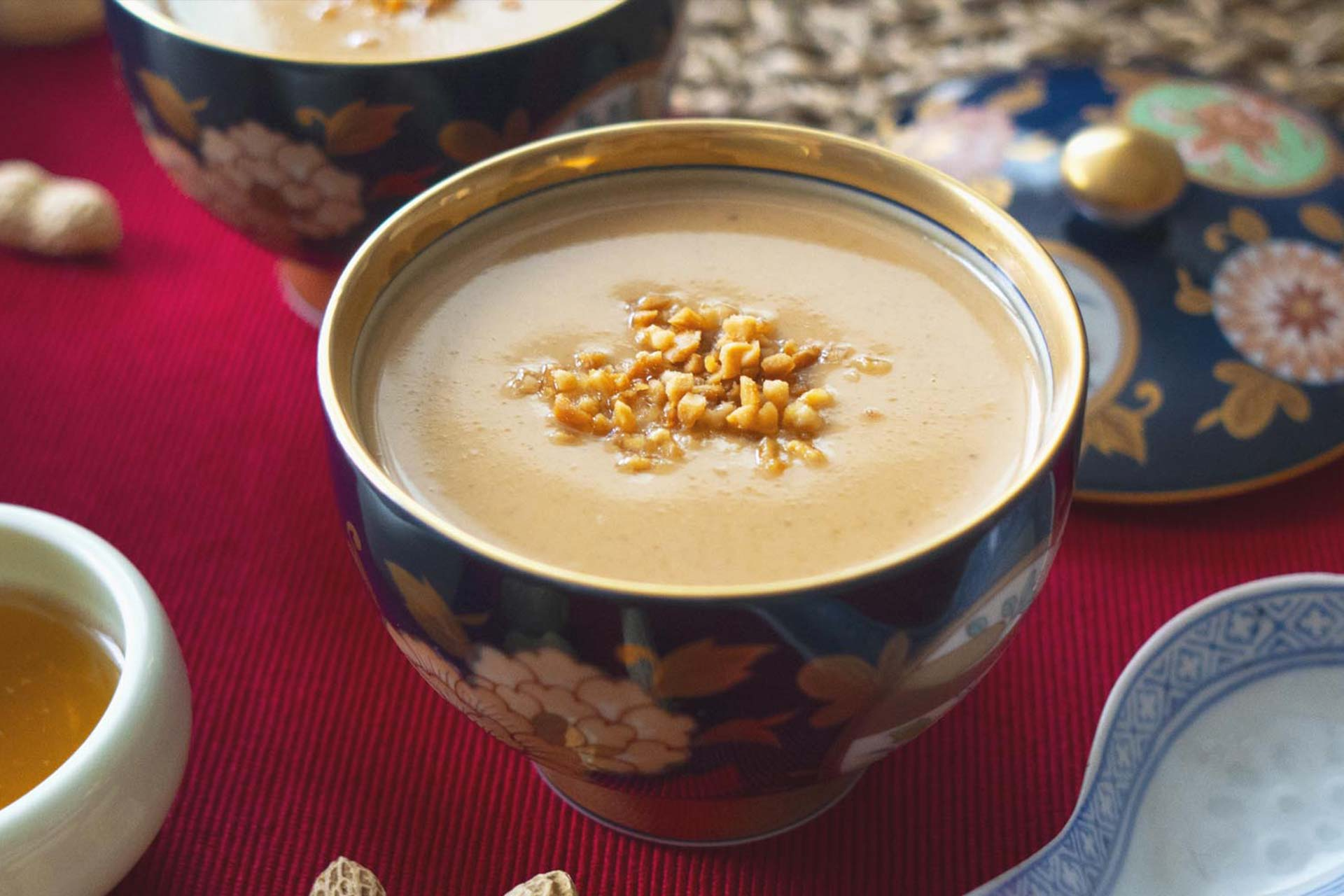 Soups are a mainstay in any Chinese menu. And if you love your soups as we do, you know that hitting the “gooey” spot is an essential quality in a thick Chinese soup.

Xanthan gum fulfils that role by replacing high-carb cornstarch as a thickener for soups, stews, porridge.

It’s also used in gluten-free baking to avoid common allergens like eggs and wheat, and you typically only need a pee sized amount (just half a teaspoon). Price-wise, it’s much cheaper than almond flour and coconut flour, which are popular keto alternatives. As for taste, the clean-tasting gum has a neutral flavour that makes it suitable for any foods unlike the slightly sweet almond and coconut flours.

Alternatively, you can skip thick soups and go for equally popular bone broth soups instead, which are keto-friendly and improves your body’s ability to digest fat.

Southeast Asia’s fruit market offers deliciously sweet tropical fruits like mangoes, bananas, pineapples, and more. Nutritionists say though, they are generally not choice keto fruits due to their higher carbs. They suggest low-sugar fruit like raspberries.

But there's also something cheaper and more readily available for those in Southeast Asia- coconut, the region is the world’s top exporter of the refreshing fruit.

There's also avocado, which is a great high-fat option. Here, we’ve got a kick-ass keto savoury bacon and avocado muffin for the mid-afternoon hunger itch.

Other than that, another abundantly available and inexpensive keto fruit you find throughout Southeasi Asia is watermelon, as long as you don’t overdo it. 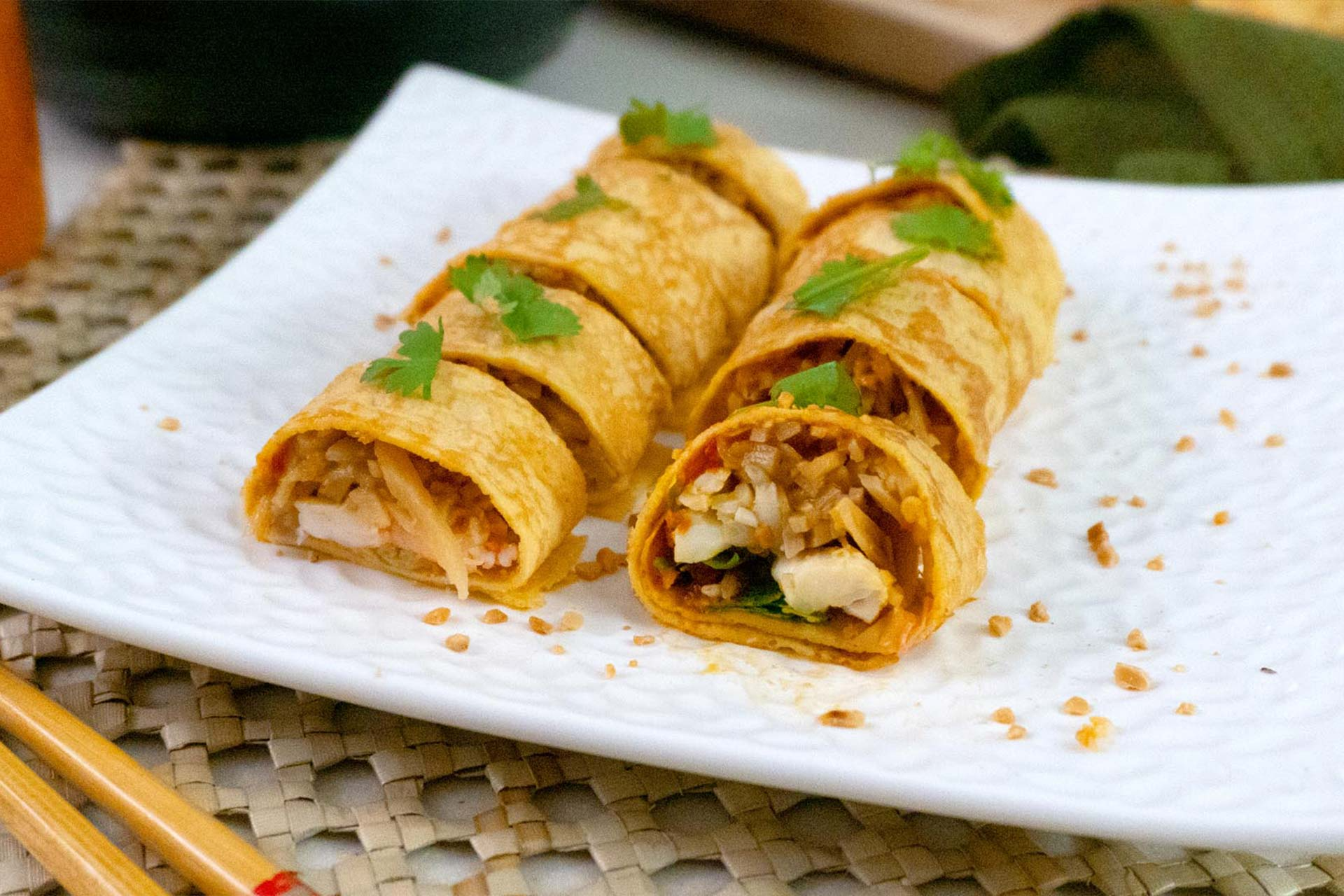 Eggs are nutritionally-dense and a super versatile ingredient that you can add to any meal as a main or a satisfying side. Make a trio of silky steamed eggs or marinated eggs in soy broth (substitute with liquid aminos) for starters.

Then proceed to our winning keto egg recipe- Keto Popiah. Crack a couple of eggs and beat it with almond flour in place of high-carb wheat flour. The pan-fried skin makes for smooth and utterly eggy keto skins that wrap around a tasty bundle of prawns, bamboo shoots and beansprouts for a juicy crunch. 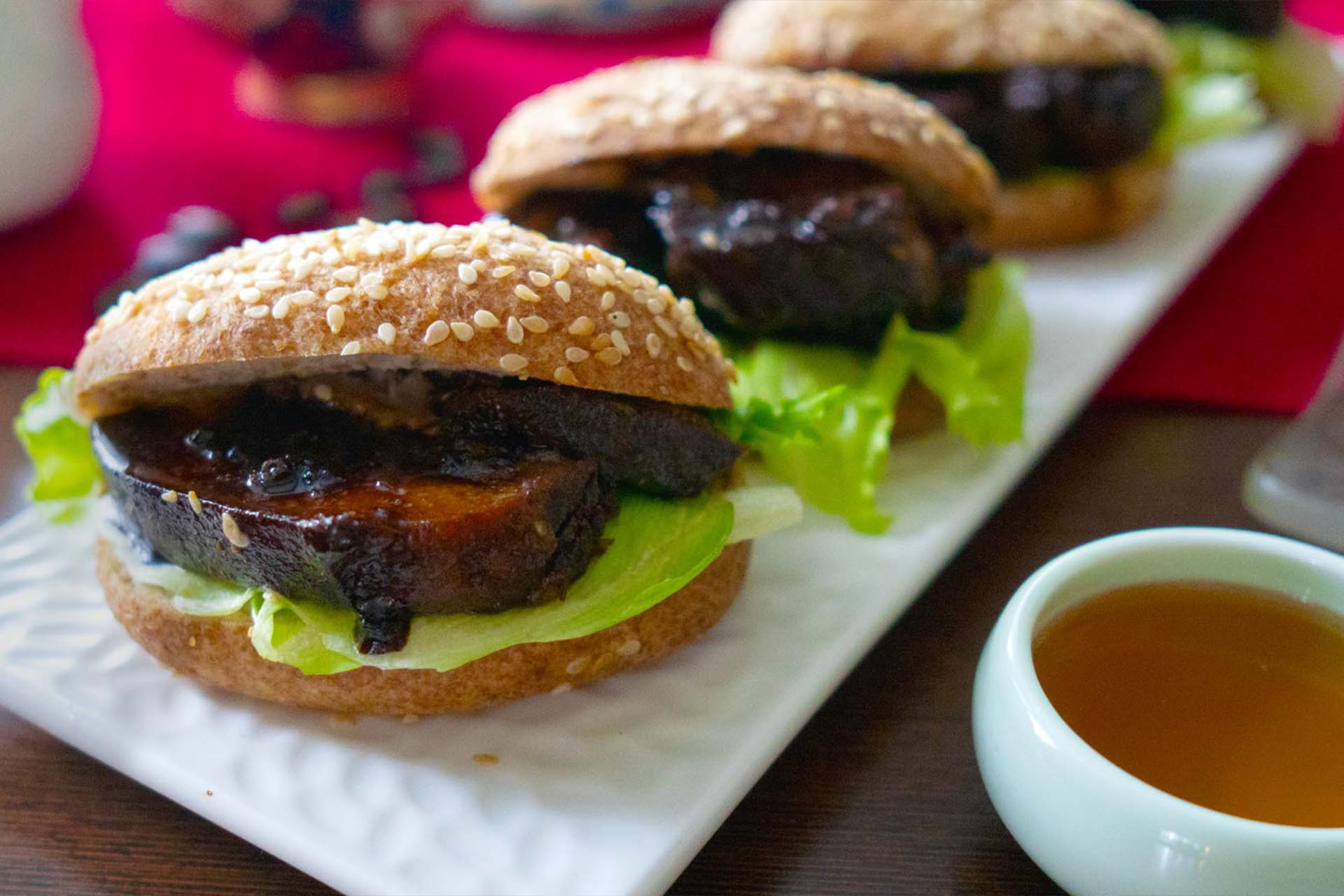 No lean cuts here. In keto, fat is fab. In chicken, you’re looking at thigh, not breast. And leave the skin on. We did this in our keto chicken meatball noodles, using fatty thigh instead of lean breast.

And here too, braising a fatty pork belly in a bewitchingly fragrant keto dark soy sauce, pictured above. In fish, choose the belly cut in salmon, or tasty and oily fish like tuna and mackerel to add depth of flavour. Generally, fish are very low in carbs and solid protein sources.

We know what you’re thinking, but trust us. It’s good. It slips into your mouth wonderfully.

As a leaf vegetable, cabbage or lettuce is the best choice for the keto diet. And not to mention, veggie wraps are way easier to do than flour wraps. Think about assembling a wonton (the steps!), then think about tearing out a cabbage leaf and roughly putting it over the meat (two steps!).

See? A single cabbage or lettuce leaf easily wraps over meat dumplings, and cooks quickly in a bubbly chicken stock. You gotta look on the bright side sometimes. 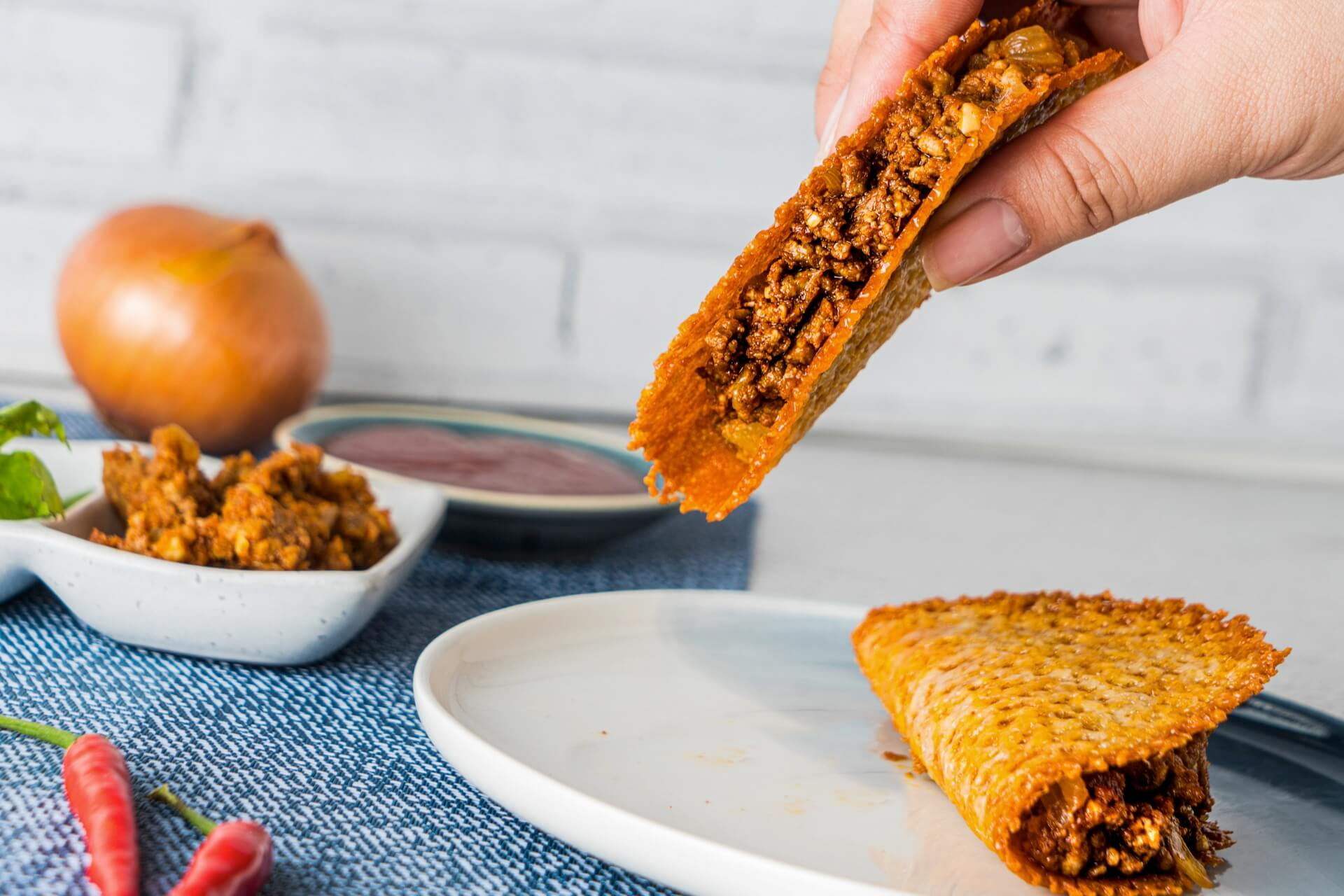 Now, there’s another genius replacement that goes outrageously well with curry miso-spiced beef chunks, pictured above. In place of taco shells, make a cheesy crispy shell and stuff soft beef chunks inside. Go on, eat this and tell us salty cheese isn’t even better than plain tacos.

Almond Butter vs. Peanut Butter: Which is Healthier?
Mar 09, 22

Investigation The Truth About Pasteurization
Mar 04, 22